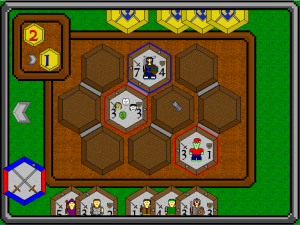 I am surprised at how easy it was to implement these things, but I have added an additional feature to Demon’s Hex. I had wanted to add some type of wall or block between spaces in order to add an additional bit of challenge to the game. So I did it.

What these walls, the grey bars between spaces, do is prevent an attack from one space to an adjoining space. If you look at the screen shot, the Dark Knight in the top middle space was unable to attack the Heads in the second row second space because of the wall between those two spaces blocked her attack. This will allow for an additional challenge to players to work with when playing the game.

While early in the match, it may not matter, the later in the match you go, the more troublesome the walls will be. Especially if you have few tokens that can attack from the openings. These walls will result in prefect games being even more rare.

It turned out these walls were a lot easier to implement than I had originally thought. But as I started fleshing out the concept, it all became a simple on/off check. I had all the other checks already in place.

I am still experimenting with a good balance of walls that are fun, unique and not too limiting. so far it seems that around 5 or six walls dispersed on the board is more than enough. Any number more than that becomes too challenging.

I had originally considered just randomly dropping some on the board but realized that I would probably go crazy trying to make sure that certain spaces are not walled off completely. So I will be creating a certain number of predefined wall layouts to use in the game. Which one you get and how challenging it is is up to chance though.

Previous
Predictability Can Be A Bad Thing In Games