Predictability Can Be A Bad Thing In Games

As I was working on Demon’s Hex, I came to realize something that might have been a bad thing for the longevity for the game. It was way to predictable. Every move you made as the player had a very predictable and obvious outcome. That was not good.

Why is that bad, you might ask? Well, let me tell you about it. The game has some very basic rules. You place a token on the board. Whichever sides has an arrow, the token will attempt to attack that side. If your attack power was higher than the defender’s power, you won and captured the token. If it wasn’t you didn’t capture it.

That is when I saw the flaw. When the attacker’s attack power was the same as the defender’s power, the defender won by default. While not a huge deal, this rule reduced the fun of the game. There are a whole heck of a lot of times when the player will have only tokens with the same attack power as the enemy.

So I decided to change the game up a bit. I decided to roll the dice, so to speak, on those scenarios. However, instead of a simple flip of the coin, I decided to make a dial with various weights depending on the actions taken. Let’s take a look: 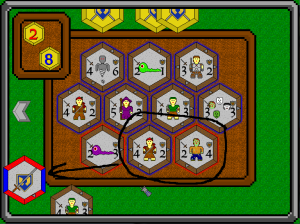 First up is the scenario in which you place a token that attacks an adjacent token with the same defense as your attack. In this case, My archer with 4 attack was going against the enemy’s Zombie with 4 defense. In the lower left corner is a dial with 4 red sides, representing the enemy, and 2 blue sides representing the player. This indicates my chance of successfully capturing that Zombie. In this case I lost. I decided after playing with various weights, that I wanted the defending token to have the upper hand when it comes to an attack against defense. 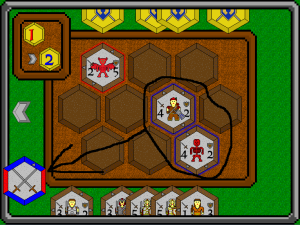 Which leads me to the next scenario, in which your token’s attack goes up against another token’s attack. In this case, the attacking token has the higher chance of taking control of the defending token, indicated by the 4 blue sides, the player, and the 2 red sides, the enemy.

Both of these dials also has an enemy counterpart with the same odds for the enemy when it plays its tokens.

I am still working on a better way to show these off. What I want to happen is to have all the potential token battles to happen in sequence. So one battle will play out, then it will move to the next and so on. With each battle requiring the dial, the animation will play in proximity to the battle taking place. Then the dial will indicate whether you are successful, you will capture the token and the dial will disappear. However, I am having some trouble getting this to work properly. The way I had it laid out has resulted in an infinite loop, so I need to figure something new out. 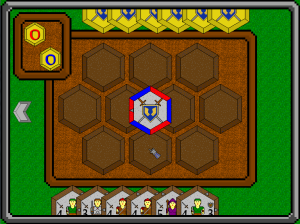 However, another good thing has come out of this effort. I have implemented a dial to indicate the choice of who goes first in the game. This one was really easy to figure out after all the earlier work and it is working. I really like this as it doesn’t just dump you right into the game. It is the type of visual that adds flavor and fun to the game without a lot of annoyance.

Overall, I think these changes are going to add some much needed additional fun to the game. And once combined with the implementation of the element properties, the walls and some decent enemy AI, this game will be a whole lot more fun.

Next
Demon’s Hex Now Has Walls