July 27, 2013 / zachary / 0 comments
Hey everyone. On Thursday, we went to the Monthly Oklahoma Game Developers Meetup. There was a great presentation by Dan Moyer on Visual Perception and how it influences game design. We then showed off Demon’s Hex as it was on Thursday (above). Then David Hartnett of Red Clay Games showed off his online multiplayer space shooter Gravity.

The game has made steady progress since our last update and made even more since the meetup. By Thursday, I had the beginnings of a turn order working. After you placed your token, the enemy would place on of theirs. Each would be highlighted with blue for the player’s tokens and red for the enemy’s. 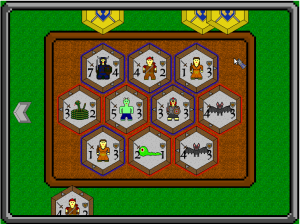 However at the time there were still a couple of bugs in that. For one, the enemy was not respecting used spaces and would from time to time place a token on an existing one. The other bug is that the token backs representing the enemy’s hand do not disappear in relation with its number of moves.

I have fixed the first bug. It was not the enemy’s fault. Turns out the player was being a bit stealthy with his moves. If the player’s hand had more than one of the exact same token, it would still place those tokens, but the grid array would retain a null value, thus confusing the enemy. You can read more of the bug in detail at this HaxeFlixel forum post.

I am still working on the enemy hand bug but it is a low priority. At this point, I am focusing my attention on getting token interaction going. I need to get this playable soon. I am hoping to have the first playable prototype by mid-August or so. So keep in the loop.

We also have more plans having to do with the Ouya, but I will come out with more details later. I talk a bit about it at the end of the video above, but I would like to have some more in depth information here.

Next
Guess What. I just Won At Demon’s Hex