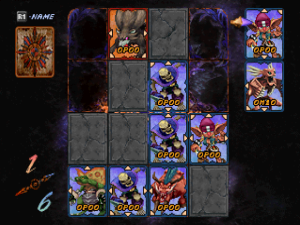 It is no secret that a large part of our inspiration for Demon’s Hex comes from the Final Fantasy 9 mini-game known as Tetra Master. Square Enix’s design team created a marvelous and exciting game within a game. It is simple to play yet complex to master.

As I have played it over the last couple of weeks, I have seen a few things I like that I neglected to consider in my initial design for Demon’s Hex.

For instance, not all cards within the same card type have the same action arrows. There are several unique action arrow combinations for each card type. This is something that I didn’t realize before picking the game up again. I like that. While Demon’s Hex won’t see that right out of the gate, I will be working to implement that functionality.

Another feature I noticed was that of what happens when you gain control of all cards on the board. This is called the Perfect Game in Tetra Master. Normally, when you win you get your pick of one card from the opposing player, but under a perfect game you get them all. That was again something I missed but want to implement. I haven’t quite worked out how this will function exactly in Demon’s Hex as there will always be one unplayed card from each player’s hand at the end of a match. However, it does give me something new to consider.

I am trying not to recreate Tetra Master feature for feature, but feel that there are certain elements that if missing would render Demon’s Hex not as fun as I want.

But for features that won’t cross over, there is one big one. In Tetra Master, if you place a card with an action arrow pointing to the empty side of a card already in play, you gain control over that card regardless of that card’s power. This is basically a free win. You only battle it out if cards have arrows facing each other.

With Demon’s Hex, I want every move to be a battle of some sort. That is why placing a token with an arrow pointing to the empty side of an in-play token still requires some kind of battle. In this case it is an attack vs defense check. Placing two tokens with arrows facing each other results in an attack vs attack check. I find this will still result in good strategy and engaging gameplay.

Another Tetra Master feature that won’t make it into Demon’s Hex is what happens when a card loses a battle. In Tetra Master, the loser changes control, whether the loser is the card you just placed or not. That means, if you place a card that fails to capture another card, you lose it. While this feature results in a more careful and thought out strategy, it punishes you for not paying near enough attention. I don’t like to unnecessarily punish the player.

In Demon’s Hex, a failed attack merely results in a failed attack. No tokens change control. I think this is a fair compromise especially when not handing out free wins as Tetra Master does above.

Overall, I am enjoying my time playing FF9. It is great to get back into this game and learn to improve my own game based on it. I think that it is extremely important that we learn from the successes and failures of those who came before us. If we don’t we can never improve our own craft, at least not as quickly.