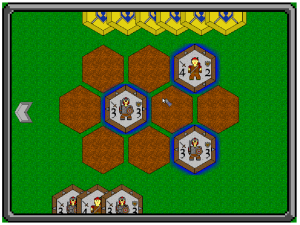 Ok. Not really. But I did add a glowing feature to the tokens. This is something that we have wanted to implement in order to make the game development process move along a lot smoother.

What we had originally planned was to have the token border, the portion with the directional attack arrows, be the color designating the player control. However, I had been having a lot of trouble trying to build the tokens on the fly and it just wasn’t working. So what I ended up doing was build a token creation tool that created the full token image with a brown border. All I have to do is enter the token stats and hit save and out pops a cool new token.

The next step was to figure out how to designate who controls the token on the board. Since all tokens have a brown border, something had to be done to highlight ownership. That is where the glowing edge comes from. I was able to get this working thanks to this HaxeFlixel thread.

You can see these glowing borders in action over on the game page for Demon’s Hex. Right now, you only see the blue edge designating player control, but we will add more colors soon. The goal is to have the colors customization to help with accessibility. Right now, I am going to stick with blue for the player and red for the opponent.

This update also has the ability for you to drag and drop tokens onto the game grid. I haven’t had that in since before I started using Flixel. I don’t have player turns set up yet, but that is my next task. This will come with some rather mundane AI at first. Hopefully in the next week or two, you will be able to actually play a match.

That’s it for today. Enjoy the update.

Previous
We Got Our Ouya And Are Excited For Its Potential