The Sky Is Falling! 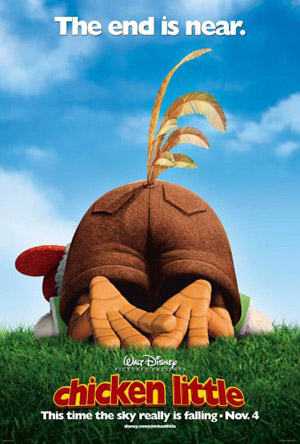 Every time the entertainment market shifts into new directions, the controlling powers scream about the death of their industry. Each time, they end up as nothing more than a Chicken Little.

You all know the story. A little chicken is sitting under an oak tree and an acorn falls and hits him on the head. He assumes he was hit with a piece of the sky and starts screaming “The sky is Falling!” to everyone he meets.

Eventually, he is found to be an idiot and everyone goes on their merry little way.

When the TV came to the market, the movie industry claimed that it would be the death of movie theatres. Movie theatres are bigger now than ever. When Netflix started offering streaming video, they made they same claim and are still making it. The movie industry are setting box office records since then.

When the DVR came out, television studios claimed that it would end the serialized television show. We have more long running series now than ever. They are now complaining about Hulu and other streaming services claiming they will destroy the industry.

When iTunes was released the major labels screamed that they would die if songs were sold for a $1. They now sell more music than ever before.

In all these instances, the major studios came out relatively unscathed. In some cases such as the tv and music industries, the controlling entities are losing money, but that money is not leaving those industries. It is now being spread to more independent content creators. We have more music available today than any time before the release of iTunes. We have greater access to foreign and independent movies and tv shows than ever before. Today, we have access to more games from independent developers than ever before.

The only threat that $1 games hold is to those studios that refuse to change with the market. If Epic’s Capps decides that they are only going to focus on $60 games, more power to him. But I don’t want to hear anything from him when the rest of the industry diversifies their distribution and monetary policies to match the market trends and he is left in the cold.

The future of the games industry has never been as certain today. Today we have hundreds of distribution paths available to us when in years past it was limited to the major consoles, PC and retail outlets. The introduction of high speed internet brought the ability to distribute digitally and completely bypass retail stores. We now have dozens of portable devices that play games and the developers can now get their games to the public at cheaper prices. We can play games online directly in our browser and we can pick up where we left off on one computer and pick it up on a totally different computer.

There is nothing to be afraid of here. The future of gaming is bright and full of thousands of people and companies fully embracing the current market shifts and making millions at it. The only people claiming the future of gaming is not certain are the former gate keepers who are about to lose their control.