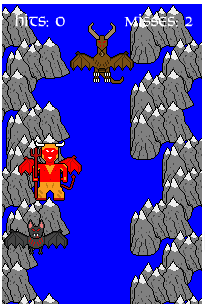 Continuing with my experiments in Flixel and the Flixel Power Tools, I have put together Dragon Fire. It is simple shooter game. You play as a dragon protecting your nest from invading monsters. Don’t read too much into it. The game was just to help me play with a few more features of the Flixel Power Tools.

I am really enjoying this time exploring these great Actionscript libraries. The people who developed them are really talented and I hope to be able to provide similar tools for aspiring programmers in the future.

One thing I would like to mention about this game is the importance of balance. During development I spent a fair amount of time playing around with the number of fireballs, the time between firing, the number of enemies, and the speed of the enemies. Each of those played a key part in the overall balance of the game. Set one too lenient and the over all game was way too easy or set one to restrictive and the game was too hard.

For example, as I was working on the game, I had only a single enemy coming at any given time. No matter how few fireballs I allowed and how long between firing them, the game was way to easy. I couldn’t make a fun and challenging game with just one enemy at a time. So I added two and the whole game changed. Now it actually mattered how many fireballs I allowed. Now the rate of fire mattered.

I can only imagine the work that a much larger and more in depth game would require to properly balance it. As I look around at the vast number of shooters with their varying types of enemies, enemy behaviors, player power ups, life meters etc, I stand in awe at the time it takes to properly balance such a game. Even them, you could completely throw off the game by making one too powerful attack or one too powerful enemy.

That is just the beginning. Think of the tremendous balancing work that goes into an RPG like Final Fantasy or Torchlight. Or a card game like Magic: The Gathering or Pokemon. These games have far more intersecting elements that require a fine tooth comb when balancing. For example, Magic once had a card called the Black Lotus that made the game super easy for players of Black decks. The card had zero cost to play and could be tapped for three mana. This allowed the player of such a card to completely dominate the game early if he got it in play in the first hand or two. That was just one card out of thousands.

Anyway. I hope you enjoy this small game and the discussion i have found in making it.

Next
A Udactious Look At Python For Gaming