I am really surprised that I completed this one. It was looking like I would be stuck on a couple of really annoying bugs for a time there. But I managed to pull through though.

Alex’s Meadow RPG was a blast to make. This is my first ever RPG. While it is not an RPG proper, there are no leveling, stats or anything like that, it does have that RPG feel to it. There is a lot that would have to be added for this to resemble a real RPG.

But enough about that, let’s talk the game as it is. As you may know from earlier blog posts, this game was based off a level that my son designed. It was really fun watching how excited he was to create the level and then to actually see it turn into a game.

So the game plays like this, you pick your character from four different classes. Each one has a unique element to it that changes how you play the game. There is a Paladin that is always in a state of defense due to his armor. A Priest that heals extra HP every time she chooses to heal. A Thief who always attacks first in battle. A Sorcerer that deals extra damage due to her strong magic. 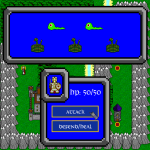 Once you choose your character, you get a small kingdom to explore. You advance by taking on quests from the king and a local hunter. Once you take a quest, you then battle a variety of monsters in four different dungeons.

I learned a lot of great stuff with this game. The first thing was I learned a lot more about the Tiled Map Editor and how it works with HaxeFlixel. I ran into a few problems with the initial level that was created, but once I worked those out, I didn’t have any problems there.

I also learned a lot about states in a game. Just little flags that control what happens in other parts of the game. That was a heck of a thing to work out, but once I got all the individual pieces built, it all came together pretty quickly.

The battles themselves were probably the single most complicated and difficult to program part of the game. I spent probably a good 10-12 hours of development time on that alone. That is more than half the time I spent total. But it was very rewarding to see it all come together in the end.

There are still a few things that I need to work out with the game. For starters, it still seems rather difficult. I tried playing as a Sorcerer but I kept dying toward the end. This is something that I am going to have to continually work at to make it right. But for now, the easiest class to play as is the Paladin.

Another aspect that needs work are the battles themselves. There is a lot that could be updated with them. For one, the enemies attack in order of their appearance. I would like to randomize the order they attack in so that the player can’t just do what I do and attack the last monster in the list to make things easier.

There are still a couple of bugs to work out in the battle system as well. One is that if the player kills a monster before its turn, the game pauses for a second during what would have been its turn. It doesn’t hurt the game any, but it can be weird. A similar thing happens after the round is over and it moves to the next phase of the battle. The cursor appears before all the cleanup is done for the round. Again, this doesn’t break the game, it is just annoying.

Finally, if you win or lose, you have the option to play again. However, I seem to be missing a flag somewhere and the player is unable to enter any node upon starting again. A simple browser refresh works to play again, but it will be nice to get this working.

One final thing I would like to add is the ability to save the game. HaxeFlixel has a great save utility and I would love to add that in. However, I am wary for the time being. as it is unfamiliar. But as time moves forward and I keep making games, that will go away.

So there you have it. You can play Alex’s Meadow RPG right now. So give it a play.

Previous
I have made my First HaxeFlixel Contribution