A One Game A Month Failure In May

This month I set out to create a Bomberman style game. I got the idea from two sources. One was a demo for grid based movement on the HaxeFlixel website. From that demo, I learned of a powerful map editing tool called Tiled Map Editor. Using these, I began work on something that I just was not able to complete.

I feel like I am a broken record on this, but I ran into a wall of time. May was the last month for my wife and I to move everything out of a failed business venture we had. So we were spending every night and weekend I had cleaning and moving things out. As such, I had extremely limited time to work on this game.

However, even though I did not complete my May One Game, I still learned a lot from this one. 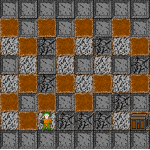 The major thing I learned was about the Tiled Map Editor. Everything in this game, aside from the starting point of the player, was put into this game using the Map Editor. I could have even included the player position in this, but i chose not to as I was building the game.

This Map Editor is extremely powerful and has been added to my permanent set of tools I use for creating games. Every 2D game I make from now on will use this tool for its level creation capabilities. Check it out for yourself to see what I am talking about.

The second thing I learned was how to properly implement grid movement for a player character. Looking at the demo code for the feature it was pretty easy for me to parse out what I needed to do to get it working. This is another feature that will be included in future games and could actually be used to expand my March game Board Game Quest.

This is definitely a game idea I want to complete in the future. I think once fleshed out it could make a great multiplayer game. THe original Bomberman still remains one of the most fun games I have ever played.

So if I find myself able to revisit it, you will not be disappointed. But for now, I have other plns for the month of June.

Previous
An Easter Themed Game For The Month Of April

Next
Tiled Map Editor Is Making A Big Difference