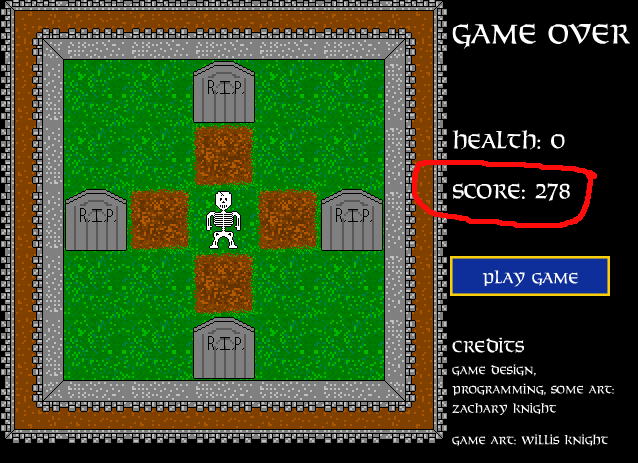 Defending Graveyards In The Month Of February

This is not the game I wanted for February, but it is the game I needed. To steal and butcher a line from Batman. I wanted to do something a bit larger and more political for the month of February but time got away from me and I was not able to complete that game. But I did not give up on my goal of one game a month.

Instead, I made something simpler and just for fun. The game is called Graveyard Defense. The premise is simple. You stand in the center of a closed off graveyard. The undead begin to rise from the graves as you attempt to defend yourself from the wave upon wave of monsters. They keep coming and keep coming faster and faster. Eventually, you find yourself overpowered and you fail.

The game is played using the arrow keys on the keyboard. When a monster rises, you press the arrow that points to the monster. If you hit it, you kill the monster and gain a point. If you miss, the monster is there waiting for its time to attack.

If you wait for too long to attack, the monster will attack you and you will lose a hit point. If you lose them all, you will die. Did I mention that the monsters attack faster and faster as teh game progresses? At that point, you have an opportunity to try again.

The graphics were mostly made by Willis. I made the animations for the paladin based on his forward facing idle pose. I also created the gravestones, the walls and the “pow” image.

The paladin’s attack poses were a bit trick as I am not too skilled at creating action poses. They could certainly be refined and if I decide to expand on this game idea, I will certainly ask Willis to redo them. I would also like to add animations for the monsters, but that would not have been possible in the time frame I had.

One potential update I could make to the game is to make it more like the game “Simon”. Right now, the monsters just pop out at random and you attack them. In this update, the game would build up a pattern of monsters that you would have to attack as they come. If you mess up, then you would lose a hit point. Fail too many times and you lose. This wouldn’t be too difficult of an update to make, but not something I felt like I could get right before the end of the month.

I created the game from start to finish in about 8-10 hours. That includes creating the various graphics, sounds and the coding. Not bad for something that is this fun. I will certainly try to get a bigger game out soon.