Ah…Memories: A ‘Promotional’ Video For A College Project

Back in college, our final project was a game. We had to do a lot of stuff along with just making a game and this video was one of those. It is sort of a making of video. The game is called Last War of Hope and was meant to be kind of a Risk style game. We developed it under the banner of ‘Divine Knight Gaming’, hence me posting it here. We never actually finished making the game as that wasn’t really one of the requirements for passing the course. It was a lot of fun and we learned quite a bit.

I don’t really ever intend to go back and finish the game. It was barely started to begin with. However, I do like talking about if just for the shear awesomeness of the work the rest of the team put into it.

So here are some of their contributions:

Dan Morton Made some really cool looking characters fro use in the game: Next we have a really awesome map created by Rosanne York: (click for a larger view) There was also some great music created by David Drake:

Finally, here is a screen shot of the game as it looked at the end of school: 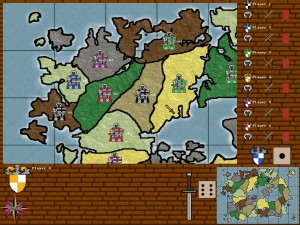 The full team was as follows: