End Of An Era; Thank You For Your Support

Has it been a month already? The time has absolutely flown by. As this campaign comes ot a close, our hearts are filled with a variety of emotions. Happiness that so many people put faith in our work enough to back us, sadness to see that we did not reach our goal.

First of all, I want to thank everyone who backed this project. You guys are great. We could never be sure on who would back us and we were surprised by the diversity of those who did back us. We knew some of you guys, but others are complete strangers to us. So it is great to see that there are people out there who like our work on its own merits as well as those who backed us because they believe in us as developers.

However, the campaign did not get off the ground. We held out hope til the end but it didn’t take off. We tried reaching out to various media outlets to spread the world, but we got no hits. I guess this project was just not interesting enough for it to rise above the tides.

So what is in the future for Demon’s Hex? We are not really sure. We would like to finish what we advertised here, but it seems that even if we did, we might not bring in the player base that would make it financially feasible. So we will have to adjust that vision.

Basically, this means that multiplayer is out of the question. Without the funds from the campaign, we won’t be able to run the servers needed to make it work.

For now, we are going to iron out the wrinkles of the battle system and possibly implement the story mode. But this will be a piece meal thing. We have decided that we are going to focus primarily on another game, so this one will not get the full attention we planned.

We have not decided on our next game. We are going to be meeting over the next few weeks to decide on that. We do have a few games that we want to work on, some that our One Game A Month challenge have helped prototype and a few that we have not yet developed a prototype for. Needless to say, the next game will be something we believe in.

Thank you again for your support, whether you backed us or just shared this campaign.

Less Than A Week Left

So we have less than a week left until this Kickstarter is done. As of now, things are not looking too hot, but miracles can happen.

We really want to get this game done for you guys and regardless of successful funding or not, we are going to get a good game out to you.

The fact of the matter is that if we are to bring you the game we describe, we will need to get the funding we are asking for. So we need you guys to share this campaign with everyone you know. It is really all down to the fans as to whether this game is a success.

Throughout the course of the story mode, players will earn experience that can be used to increase the strength of their default set of tokens through advancement. Think of it as a promotion for your token’s class.

There are two types of token classes that will be available at the beginning of the game, Squire and Acolyte. These two classes will determine what path that token will be on to advancement and better tokens. There are a total of 16 classes in each class structure.

The first class, Squire, is a physical class. These are your warriors and fighters. They advance in various forms of fighting and weaponry. For example, here is a branch showing the Squire advancing through to Paladin and dabbling as a Knight.

As you follow the arrows from one class to the next, that token will increase in attack, defense, as well as directional attacks.

Moving on to the Acolytes, they are masters of the metaphysical. They tap into the spiritual energies of their surroundings to defeat their foes and support their fellow warriors.

As Acolytes advance through the ranks, their path is set based on how they apply their magic. If they wish to use that magic for fighting or support, they will grow in knowledge and wisdom.

This example shows an acolyte advancing to Sorcerer while dabbling a little as a Priest.

The way this works, is that as you fight story battles with a token of a certain class, let’s say Squire for this explanation, That token will gain experience in that class. Once it reaches a certain level, that experience can be cashed in to advance to the next class. In cases where a class branches off to two or more classes, you would have to play as the base class multiple times to unlock all classes that branch off.

Not seen in these two paths are special classes that open up as you master certain branches. These classes only show as you experiment with each class and their branches.

The game will be structured in such a way that each of your default tokens will be able to advance through all the classes, if you wish. So you will not be lost if you decide you would rather become a priest and beyond rather than a wizard.

While the story mode limits you to only the starting 6 tokens and what ever class they are at for the story battles, every time you unlock a class, you gain one unique token of that class that is added to your collection that can be used in coliseum and multiplayer matches. So you have an opportunity to gain up to six copies of every token in these class trees for casual play. Story mode is the only way to earn these particular tokens.

It has been five days since we launched this campaign and we are really impressed with those who have supported us so far. You guys are awesome.

However, we did realize that our rewards weren’t explained at all really. We can’t believe that we let that slip our minds the way we did. So we have come to tell you what those special rewards are.

The booster packs will be pulled from the over 100 tokens we have planned for launch plus the many many more we will add as the game grows. Each token will be assigned a rarity value, common, uncommon, rare and legendary. This value will be based on the token strength relative to the rest. Each pack will contain 6 tokens, 1 rare or legendary, 2 uncommon, 3 common.

The booster packs you get can be redeemed at any time after the game launches. We will not force you to redeem them at the beginning. So if you want to save your packs until we have more tokens in the game, you will have that ability.

Additionally, if you would like to add booster packs to your pledge, you can do so quite easily. For every $1 you pledge above your reward tier, you will be eligible to get 1 extra booster. So if you pick the $5 reward tier and pay $8, you get the 2 boosters that come with the tier plus 3 extras for a total of 5 booster packs.

When we send out the surveys, you can let us know how many you want.

We have 5 embroidered patches that backers can get. These will be based on the corresponding tokens in the game. They won’t be exactly the same, as we have color limits, but they will be as close as we can make them. So here are all the badges we have coming to you.

We also have a t-shirt that you can earn through backing us at $75 or more. This shirt will be a royal blue with our game’s logo across the chest. Here is a mock up of what that shirt will look like.

There you have it. We have a lot more news and updates coming your way as this Kickstarter rolls on. So stay tuned. 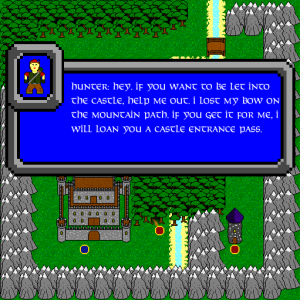 July 7, 2014 / zachary / 0 comments
As of today, we have launched our campaign to fund Demon’s Hex. All the details are available at our Kickstarter Campaign Page. So check it out.

From this time forward, we will be posting regular updates over on the Kickstarter page and cross posting them here. We also have a handy widget over in the sidebar to allow you to quickly find the campaign and track it.